Banaras also known as Varanasi,or Kashi ,is a city on the banks of the river Ganges in Uttar Pradesh, A major religious hub in India it is the holiest of the seven sacred cities (Sapta Puri) in Hinduism . Varanasi grew as an important industrial centre famous for its muslin and silk fabrics, perfumes, ivory works, and sculpture.Buddha is believed to have founded Buddhism here around 528 BCE when he gave his first sermon, 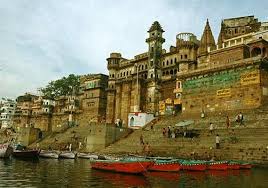 This is easily one of the must visit places in Varanasi! Located far south, Assi Ghat is where pilgrims pay homage to Lord Shiva by worshipping a huge lingam situated under a peepal tree. This ghat is a lively space, rippling in chaos and commotion and one that vividly captures the ancientness of Kashi. Among the most famous religious places in Varanasi, Assi Ghat is a must visit. The alluring sight of the arti here makes Varanasi one of the most beautiful cities in India.

The main ghat in Varanasi on the Ganges river, Dashashwamedh Ghat is a flamboyant place known for its spiritual transcendence. It is common knowledge that Lord Brahma sacrificed 10 horses in a yajna here, and thus the name. Dashashwamedh Ghat tops the list of tourist places to visit in Varanasi at night as it is a compelling space to dawdle in this small town. Be here for the Agni Pooja or Ganga aarti, as it is popularly called.

Considered to be an auspicious place to be cremated, Manikarnika Ghat is among the pivotal places of interest in Varanasi. This ghat is an exasperating and startling experience in itself as absolutely nothing is considered sacrilegious here. The setting sun and the glowing pyres along with candle-lit flower bowls floating down the holy river Ganga make Manikarnika Ghat a sight to behold. When looking for the best tourist places in Varanasi, consider visiting this ghat.

This places should definitely be a part of our itinerary for a memorable Varanasi sightseeing. Built by Raja Rana Jagat Singh at the time when he came to the city as a pilgrim, this ghat attracts a lot of tourists day in and out. It is situated right next to a palace which is believed to be the residence of the Maharaja during the period of his pilgrimage. If architecture is something that tickles your fancy, then there’s a lot to see and admire here. 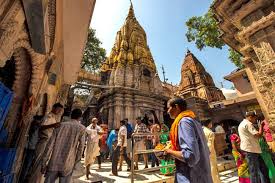 The list of places to visit in Varanasi would be incomplete without including the famed Kashi Vishwanath Temple. Dedicated to Lord Shiva, this temple is one of the 12 Jyotirlingas and has also been referred to in the holy scriptures. The temple structure as it stands today consists of a series of smaller shrines located in the Vishwanath Galli.

Among the many sightseeing places in Varanasi is the Tulsi Manas Temple, the place where Tulsidas wrote the Hindu epic Ramayana in an Awadhi dialect of the Hindi language. The temple was funded by the Birla family and constructed in white marble in 1964. Verses and scenes from Ramcharitmanas are engraved on the mandir walls.

Located at the banks of River Assi, this temple is one of the most-visited Varanasi tourist attractions. This temple is not only known for its spirituality but is also popular across the town for its historicity. Built by the well-known freedom fighter Pandit Madan Mohan Malviya in the 1900s, this temple is visited by the devotees of Hanuman as well as Lord Rama.