Southern India is well-known for its cultural heritage, and the Kamakshi Amman Temple represents an important gem from the past. Set in the midst of Kanchipuram, also known as the City of Temples, this place of worship is home to the divine Goddess Kamakshi, who is believed to be an incarnation of Parvati, the Hindu goddess of love, fertility and strength. Visitors claim to experience a formidable energy in the air that can only be felt in the presence of the deity. This makes the shrine a popular destination for devotees and culture buffs. 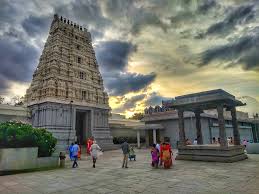 It is one of the 51 Shakti Peethas, which are sacred shrines built around the falling body parts from the corpse of Goddess Sati from heaven. It is believed the naval part of her body fell at this site, thus making it a holy abode. Shaktism is based on a Hindu tradition focused on worshipping the Goddess. In the name Kamakshi, the letter 'Ka' represents Saraswati (the Goddess of knowledge and wisdom), 'ma' represents Lakshmi (the Goddess of wealth and prosperity), while 'akshi' refers to gracious eyes. Together, these three Hindu Goddesses or Devis form the holy trinity of the female transcendental energy of the universe.

Ancient as it is, the sacred abode is rooted in the beliefs of civilisations gone by. With its prominent artistic gopurams and the mythology surrounding its origins, the Kamakshi Amman temple creates an enigmatic aura that draws in not just ardent devotees, but also curious travellers from all over the world. Unlike other holy places in Southern India, this temple is well-maintained and kept clean, providing a pleasant atmosphere for prayer and worship.

Varadharaja Perumal Temple located in the city of Kanchipuram in Tamil Nadu is dedicated to Lord Vishnu. It is one of the 108 Divya Desams dedicated to Lord Vishnu and is of immense religious importance. It is also believed that the Alwars or the poetic saints visited this temple. The temple complex is expansive and is a work of worship that was built during the reign of the Chola Kings. It is, hence, also of great historical importance. Devotees of Lord Vishnu from all over the world visit the temple to seek blessings in Vishnu Kanchi especially during the 10-day Vaikasi Brahmmotsavam, Purattasi Navaratri and Vaikunda Ekadasi. The majestic architecture of the temple complex and the intricate carvings are sure to mesmerise one and all. The serene vibe of this scared spot is so surreal and unexplainable that one really has to visit the temple to experience it.

Varadharaja Perumal Temple is a part of the trio Mumurtivasam along with Ekambareswarar and Kamakshi Amman Temples. The temple is also known as Perumal Koil and is believed to highly sacred in Vaishnavism. Visitors can explore the enormous temple complex that has 32 shrines and other features built according to the ancient temple architecture. This temple has a unique idol of Lord Vishnu made of wood. The idol is kept in a silver box and is immersed in water. Locals believe that the region received good rainfall after the idol is wholly submerged in water. The temple and stories related to it have been mentioned in the Vedanta Desika, Thirtha Prabandha Peyalvar, Bhoothathalvar and several compositions created by Muthuswami and Tyagaraja Dikshitar in the 18th century.

The Devarajaswami Temple was constructed by the Vijaynagar kings. It is devoted to the Hindu god Lord Vishnu. There are ornamented engraved pillars that can be seen inside the temple.

This scrupulous temple has a marriage hall that was built in remembrance of the marriage between Lord Vishnu and Goddess Laxmi. There is also a water tank that contains a large statue of Lord Vishnu inside the water. The tank is debilitated every 40 years and it is at that time, the 10 meter high statue can be seen, and is then established for darshan for 48 days before it is immersed in water again. There is also an enormous chain that was engraved out of one single stone.

Kanchi Kailasanathar Temple is an important religious site is located on the banks of the Vedavathi River, at the western limits, facing the east side in the Kanchipuram city of Tamil Nadu. The temple holds great significance and value for the Hindu devotees and is visited by a large number of tourists all year round, but the number of visitors increases drastically at the time of the Mahashivratri. The Kanchi Kailasanathar temple is embellished with beautiful paintings and fantastic sculptures.

The Kanchi Kailasanathar Temple is the most ancient temple from amongst all the temples that are located in Tamil Nadu and was built during 685 A.D. and 705 A.D. The construction of this grand structure was started by the Pallava ruler Rajasimha, whereas his son Mahendra Varma Pallava completed it. The architecture of the temple is an excellent example of the Dravidian style of construction, and the temple is carved out of sandstone. The architectural beauty of this temple is remarkably different from that of all the other temples in Tamil Nadu. A striking feature is the sixteen-sided Shiva lingam that is made up of black granite at the main shrine.

Thennangur Panduranga Temple is located in the Thennangur village in the district of Tiruvannamalai in Kanchipuram. The town is also known as the birthplace of Goddess Meenakshi. Thennangur Panduranga Temple is dedicated to Panduranga and his consort Rukmayee. It attracts tourists from all over the world for its religious importance, its unique architecture and the divine idols of Lord Panduranga and Rukmayee. The main idol of the temple was installed by Swami Haridas Giri which he had brought along with him from Pandharpur about 500 years ago. The striking temple also houses an idol of Achyutraja Perumal which is a rare find India. It is said that no temple in India has an idol of Achyutraja Perumal, making it a unique find in the country.

The idols are grand and elegantly dressed with great enthusiasm and spirit in colourful clothes and beautiful jewellery. The sight of the beautifully decorated idols is a treat to the eyes. Many get mesmerised by the dazzling beauty of the idols and witness, not just the blessings of the Almighty, but also the magical vibe in the temple atmosphere. One can see a beautiful merger of the Orthodox Sampraday and the Bhajan Sampraday here. It is believed that the Lord blesses newlywed couples hence most families choose the Maha Mandap inside the temple complex as their wedding venue. It is also believed that Lord Panduranga appears in different forms on special occasions. The Thennangur Panduranga Temple is thus of immense religious and spiritual importance to the devotees travel miles to visit and offer their prayers.