Manikaran, one of the most historical and religious sacred places located 45kms away from Kullu at an altitude of 1737mts.It is a famous Hindu and Sikh pilgrimage site in Himachal Pradesh located on the banks of holy river Parvati. Manikaran is derived from “the jewel of the ear”. It is believed that Lord Shiva and Mata Parvati stayed here for 1100 years. While she was playing in the pond, one of her gems from her earning lost in the pond. She was worried and she Urged Shiva to find her gem but when Shiv Ji could not find then he opened his third eye and Naina Devi was born. She became his eyes and went looking for Mani. Actually the Mani was landed with Sheshnag, he split out some gems and asked Parvati ji to find her own gem. She picked the one and cursed others to become the stones. It is said with the splitting of Sheshnag came this hot springs. 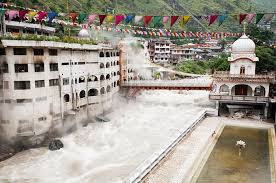 Lord Ramchandra temple is the most auspicious temple of Manikaran. The Guru Nanak dev Ji Gurudwara provides some extraordinary sights views while one can enjoy a dip in the hot waters from the springs. The Gurudwara of Manikaran is very much renowned because of its association with Guru Nanak dev Ji who visited this place in 16th CE with Bhai Mardana (his disciple ). Devotees to this Gurudwara can take a holy dip in the hot water. Even one can cook the grains of rice in it. Gurudwara is regarded as very much sacred by the Sikhs and located near Manali, which is considered to be a popular tourist spot. 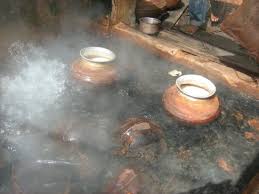 There is a long tunnel kind of corridor which is known as GARAM Kothi. The floor stones are very hot to place even the feet for a long time. But few people have so much of will power that they sit on the floor and it is believed that it would cure their joint problems and other diseases.

The best time to visit is during the Winter season.