Nainital is the lake district of India; famous for its natural mountain beauties. Nainital derives its name from Naini Lake. The highest point is Naina Peak or China Peak, with an elevation of 2,615 m. Nainital was founded by a European businessman Percy Barron in 1841 and later it became a summer retreat for the British who spent summers in these hills to escape the extreme hot weather of the plains. The British government built several schools and colleges in the region. This place is named after Naina Devi Temple, which is dedicated to Shakti, a form of Parvati.

It is a kidney-shaped freshwater lake located in the midtown of Nainital. It is a popular tourist spot throughout the year. Lake is surrounded by snowy mountains. The destination is very famous for its beauty, boating in the shimmering water and quacking with the joyous ducks. It is an unforgettable experience. 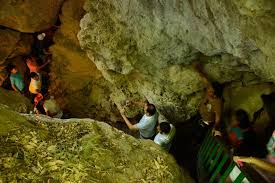 Eco Cave Garden is a tourist site consist of rocky caves that are developed into a garden. It is especially for Children. It is a fun place to explore the different types of caves with adventure. 3. Naina Devi Temple – 4 Km. Mata Naina Devi Ji Temple is one the Shakti peeth of Mata Sati.People from all around the world visit this temple. t is believed that Devi Sati sacrificed her life by jumping into the Yagya organized by her father King Daksha. When Lord Shiva was moving around the universe carrying the dead body of Devi Sati, hen Lord Vishnu using his Sudharshan Chakra cut the body into 51 pieces out of which the eyes fell on this place.

Mall road is one of the most visiting places in Nainital which is parallel to Naini Lake, connecting the two ends of hilltown. t is famous for Shopping, food, and the cultural center of Nainital. 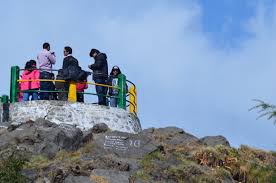 It s a popular picnic spot in Nainital. t is also known as Dorothy's seat and situated in Aryapatta hill. he serene and peaceful environment of Tiffin top makes it irresistible to the photographers.

Bhimtal is a town and Nagar Panchayat in Nainital district, t is more of an idyllic place it is less crowded than Nainital.You can explore Garg Parvat L Damayanti Tal, Bhimtal Aquarium, etc

.This is one of the beautiful and renowned places to visit in Nainital .Apart from the variety in species of birds also the perfect spot to spend a day.The lush greenery and picturesque view make the day amazing.