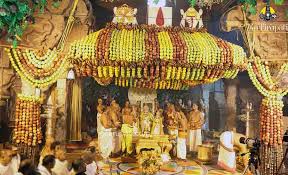 Tourism sector is of great importance to the city. It is because of the presence of Tirumala Venkateswara Temple and a number of other temples in and around the city. It attracts large number of tourists which helps the tourism department of the state in generating revenue.Tirumala is said to be one of the most visited religious sites on earth, and Tirupati Temple is currently a Guinness World Record holder for most visited temple in the world. Tourism comprises a large portion of the Tirupati economy.

Tirupati is a city in Chittoor district of the Indian state of Andhra Pradesh. The city is home to most famous and important Vaishnavite shrine of Tirumala Venkateswara Temple and other historic temples and is referred to as the "Spiritual Capital of Andhra Pradesh". It is one of the seven Swayam vyaktha kshetras dedicated to Vishnu. Tirupati is home to many educational institutions and universities. For the year 2012–13, India's Ministry of Tourism named Tirupati as the "Best Heritage City.

Tirumala Venkateswara Temple is the most notable temple for being the world's richest Vaishnavite temple of Lord Venkateswara. Beside Venkateswara Temple, the city is known for many other ancient temples, such as Padmavathi Temple at Tiruchanur, Govindaraja Temple, Kapileswara Temple at Kapila Theertham, Thathayyagunta Gangamma Temple of Goddess Gangamma is the Gramadevata of Tirupati ,  Sri Kodandaramaswami Temple etc.
Besides historic temples, there are other tourist destinations in and around the city. Chandragiri Fort is a historical fort, located in Chandragiri. The fort also host an Archaeological Museum maintained by Archaeological Survey of India established in 1987, Sri Venkateswara Zoological Park in Tirupati is the largest zoo park in Asia, which covers an area of 5532 acres. Tirupati also hosts a Regional Science centre. A Space Exposition Hall which has a digital Planetarium, first of its kind in Andhra Pradesh and an Innovation Space are added to this centre now.

Which Cuisine is Famous in Tirupati?

Tirupati is world-famous for Tirupati Laddu. It is the prasadam at Venkateswara Temple, Tirumala. Tirupati Laddu had got Geographical indication tag which entitles only Tirumala Tirupati Devasthanams to make or sell it.

Tirupati also celebrates a carnival named as Tirupati Ganga Jatara, held during second week of May every year. This is a week long festival where Goddess Gangamma (Grama Devatha) is worshiped.  Rathasapthami is another festival, celebrated during February, when Lord Venkateswara's processional deity (Malayappa) is taken in a procession around the temple on seven different vahanas from early morning to late night.

All about Arts and Crafts /Architecture Gallery:

Tirumala Tirupati Devasthanams established Sri Venkateswara Museum, one at Tirumala and the other at Tirupati. It has a wonderful collection of Tirupati temple architecture and historical artefacts, such as ancient weaponry, pooja items and idols. It has a comprehensive photo gallery that gives a unique insight into the Tirupati region's culture and traditions. It also boasts a meditation centre.
Must visit place in everyone’s life