The Kumbh Mela is one of the most extraordinary human gatherings on the planet. Held in India, the fair commemorates the legendary Samudra Manthan event in Hindu Mythology. The fair takes place only once in every twelve years for twelve days which are equivalent to the twelve years of the Hindu gods in the mortal world. The banks of river Ganga at Haridwar, river Godavari at Nashik, the confluence of river Ganga, Yamuna and Saraswati at Allahabad and river Kshipra at Ujjain serve as the venues for this huge carnival.
The Kumbh is held every three years in one of the four cities, Haridwar, Allahabad, Nasik and Ujjain. The last Kumbh Mela was held in Ujjain in 2016. The next Kumbh Mela will be held in Ujjain in 2028.

Kumbh Mela is a Hindu pilgrimage of faith in which Hindus and people from all over the world gather together at a place to bathe in a sacred river. From ancient times, four fairs are widely recognised as the Kumbh Melas: the Haridwar Kumbh Mela, the Allahabad Kumbh Mela, the Nashik-Trimbakeshwar Simhastha and the Ujjain Simhastha. These four fairs are held periodically at one of the four places by rotation. The main festival site is located on the banks of the river Ganga at Haridwar, Sarasvati at Allahabad; the Godavari at Nashik; and the Shipra at Ujjain. Bathing in these rivers is believed to clean people of all sins.
The Ujjain Kumbh Mela is a pompous and colourful event and is a treat for travellers. It is an enriching experience which immerses the attendees of the fair in the colours of spirituality and old-world charm. One is never too young or too old to attend the Kumbh Mela. A ceremonial bath in these holy rivers is considered to be the essence and most significant ritual of this festival. It is believed that a holy dip in these rivers cleanses the soul of individuals and frees them from all their sins, as the rivers turn into the areas of sanctity during the favourable time of the Kumbh Mela.

Mahakaleshwar: Mahakaleshwar Temple, located in the ancient city of Ujjain in the state of Madhya Pradesh, is one of the 12 Jyotirlingas in India. Dedicated to Lord Shiva, the Mahakal lingam at this temple is believed to be Swayambhu (self-manifested), obtaining currents of Shakti (power) from within itself. Mahakaleshwar is also one of the 18 Maha Shakti Peethas in India.

Another factor that makes Mahakaleshwar one of the most revered Jyotirlingas in India is the fact that the Mahakaleshwar idol is Dakshina Mukhi, facing south, unlike all the other Jyotirlingas. Considered no less than a Hindu pilgrimage, the Bhasma-Aarti of Mahakaleshwar Temple is hugely popular amongst the devotees.

The Mahakaleshwar Temple complex is a spacious courtyard with sculptural finery and sophistication that is influenced by Maratha, Bhumija and Chalukya styles of structural design and is complete with impressive lingam sculptures of Mahakaleshwar. It also has the inscriptions of Omkaresvara and Nagachandresvara and images of Ganesha, Kartikeya and Parvati. The temple, which is spread over five levels, sees a huge throng of devotees during the Maha Shivaratri festival.

Ram Mandir Ghat is of immense religious significance to Hindus because it is one of the four locations where the Kumbh Mela takes place every 12 years. It is considered to be one of the oldest bathing Ghat in connection with the Kumbh celebrations. Millions of people throng this place during the mega Kumbh festival as it is believed that a dip here can wash off all your sins. Watching the sunset from the Ram Mandir Ghat is one of the most enchanting scenes you'll experience.

The Harsiddhi Temple boasts of an idol of Annapurna painted in dark red colour between the idols of Mahasaraswati and Mahalaxmi. This temple, was almost in an irreparable condition until the Marathas decided to reconcile it. This is the reason why the temple has a Maratha touch to it. 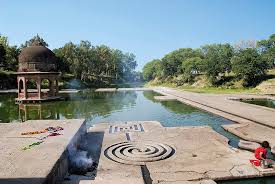 Situated on an island based in the Shipra River, this Palace holds immense religious significance. The Palace is flanked on both sides by the waters of the rivers and the technical aptitude of the predecessors can be seen in the man-made tanks and channels. It was so celebrated in the past that once Emperor Akbar and Jehangir had visited this gorgeous monument, which is reflected in the two Persian inscriptions that are found in one of the corridors of the palace. It was broken down during the reign of the Pindaris, but Madhavrao Scindia saw the inner beauty of this monument and decided to restore it.

Chintaman or Bade Ganeshji Ka Mandir is located close to the tank of the Mahakaleshwar Temple and right in front of you stands a gigantic sculpture of one of the most worshipped Gods in India - Lord Ganesha.

Lord Ganesha has already been a significant figure in the lives of millions of people in the country and even though the architecture is not world-class, people still flock this place in huge numbers. Surprisingly, in the centre lies an exceptional statue of Hanuman with five faces symbolizing courage, loyalty, devotion, strength, and righteousness. 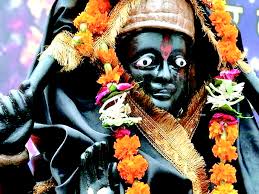 The Shani Mandir in Ujjain is India's first Navgraha Mandir and the only Shani temple in the world where Shanidev has been idolised as Lord Shiva. Amavasya nights are given special importance at the temple with thousands of devotees offer more than 5 quintals of oil to the lord